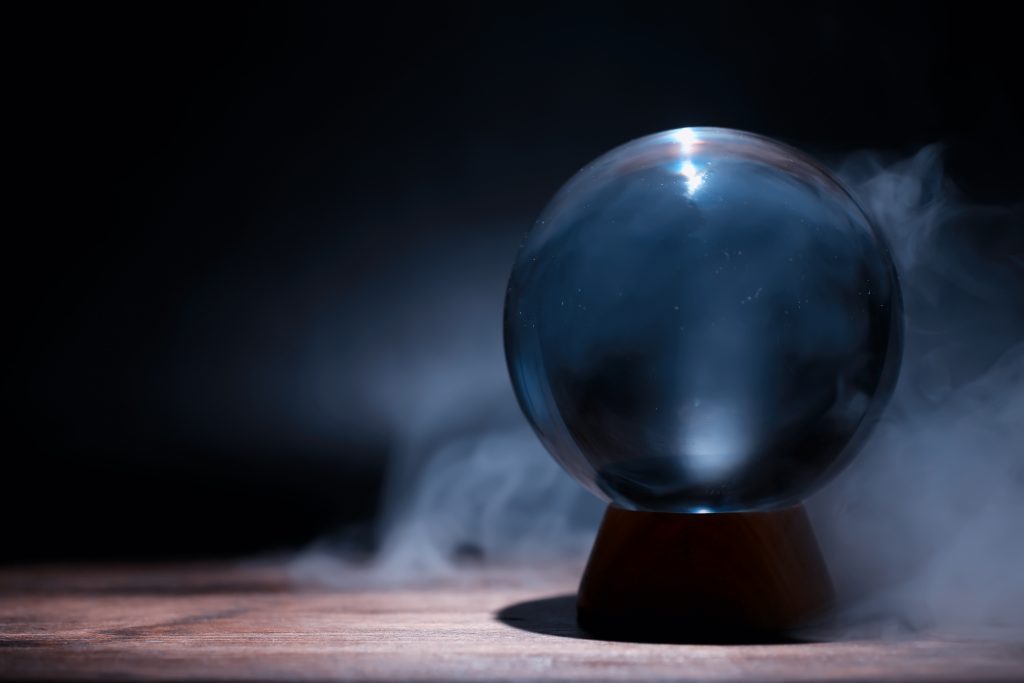 With the current turbulence in the traditional markets, it makes sense to consider what might happen to the website investing space if (when) a recession comes.

This is something I’ve been considering since early 2019, and while I don’t have any conclusive answers, I’ve definitely done a lot of thinking.

Bear in mind though, these thoughts are just thoughts, ruminations, and hypotheticals. Don’t take it as investment advice. Also, I’ve never been in the website investing space during a recession (I don’t think many people have), so this is all just conjecture.

The only crystal ball I have, is the image above.

To some extent the website investing space was born out of the last recession, and it’s certainly a lot more mature now than before, so any real analysis of how it performed last time wouldn’t necessarily be applicable here anyway.

Still, I think it’s important to at least attempt to tackle this question, because a recession is more or less inevitable, and strategy may change significantly.

Just yesterday, I was on the phone to a potential Onfolio client who asked me this same question, so I know this post is timely.

Also, hat-tip to Justin and Joe from EmpireFlippers, who have discussed this same recently in their “Predictions for 2020” podcast which you can listen to here.

Or Thomas Smale from FE International who said it more succinctly in a recent tweet:

Speaking of Tweets, I also asked this question on Twitter and had some interesting replies, which you can check out by visiting my original tweet.

Working on a post about how a recession might affect the website investing space. Obviously lots of guessing and speculation taking place. What things do you all think “might” be affected the most? And in what way? No points for saying multiples will go down

In order to really understand how a recession may affect the industry, we should first consider what things could actually be affected in the first place.

It’s not just a case of assuming website multiples will fall (or even rise), because there are also second and third order outcomes to consider; how will supply chain issues caused by the Coronavirus affect online retail and therefore affiliate commissions and display advertising spend?

Here are some of the things I can think of:

Let’s go through them one by one.

On the one hand, you can assume they will be lower, as more people are looking to sell their sites in a pinch, and that increased selling pressure drives multiples down.

On the other hand though, you could have a situation where people who have had over ten years of stock market and real estate gains are suddenly looking for alternative ways of generating returns. This will lead to even more buying pressure, which can only drive multiples higher.

Which is the more likely outcome? Well, personally I think both.

We’ll see more situations where a seller needs to sell quickly, leading to more bargains, but overall multiples will continue their upwards momentum.

Also, you have to consider how things will change at different price points. There is such an overwhelming number of buyers in the sub $100k range, that we might not see much difference, but in the $300-$750k range, where buyers are more sparse and sellers may become more desperate, that multiples do indeed drop there.

Plus, we’ll likely see more seller financing or earnouts at that range, which brings us onto the Deal Structures segment.

Presently, most deals are done either fully cash, or at least 70% cash. The higher the valuation, the more likely you are to see an earnout.

In their recent State of The Industry Report, EmpireFlippers pointed out that there are actually more earnouts at lower valuations than they expected, but this makes sense because there are more deals in general at the lower price. As a percentage of total deals, earnouts are still more commonplace in the $200-500k+ range.

I can see earnouts becoming more common during a recession, and the actual amount of the total consideration being an earnout increasing too. Instead of sellers only financing 30% of the deal, we may see a larger %.

Why? Because people with larger sums of money may be less willing to spend it all at once, and sellers may be more willing to accept worse terms than they would normally.

I can’t really see earnouts becoming commonplace below $100k though, as I don’t believe a recession will reduce the demand for sites of this size, and sellers therefore won’t need to accept those terms.

What about the actual income websites generate? Will that be affected?

I would assume so for some niches and monetization models, and maybe not for others.

eCommerce sites or FBA businesses will surely be affected the most, especially if supply-chain issues become worse.

This could also affect affiliate websites too, if the vendors they are promoting have a dip in sales. Display advertising revenue will possibly go down too, as businesses tighten their advertising budgets.

It really depends on the topic of your site though. If your content covers gold investments or personal finance, you may see an increase rather than decrease.

From an investment standpoint then, it means there is of course opportunity as well as risk. The risk would be buying a site now, only to have its income decrease later.

For opportunities though, there are several:

There are likely other opportunities and risks I haven’t thought of yet too.

Predicting which niches will do well and which won’t is harder. Studying previous recessions is the best place to start, and then considering what first and second order consequences of those might be.

How do people behave in a recession? Do they earn less and spend less, or do they spend differently? These are the main questions to understand.

For example, while a generic Amazon affiliate site may perform worse simply because Amazon itself performs worse, a credit card points site may perform better, as people are looking for better ways of getting value out of their cards.

That said, many Amazon sites won’t be affected if they promote items that people need regardless of the economic conditions, like gardening items or consumer staples.

It’s hard to list every industry and consider how it might perform though. A better strategy is to just ask “How might this perform in a recession and what could be done about it?” when evaluating a site.

This article attempts to explain not only what might happen to eCommerce and marketplaces during a recession, but also has some interesting ideas for how those businesses can capitalize on said recession.

I would imagine that lenders make it harder to get a loan during a recession, but at the same time, it could be a perfect opportunity for an SBA lender to make a killing.

I really don’t have any answers to this, but I’m sure SBA loans, and debt in general, will be affected.

Business lending platform Kabbage, doesn’t seem too worried; though I’m sure they’d say that regardless.

Would A Buyer’s Market Emerge?

For the longest time, we’ve been in a seller’s market, particularly at the lower end of the market. Full cash offers are the norm for anything below $100k, and even at the $500k range, you’ll do well to get more than 30% seller financing.

Would this change in a recession? Would buyers have the power and the ability to demand better structures or cheaper valuations?

I don’t think much will change at the lower echelons because there is so much demand already, it would take a huge upheaval to tip the scales in the favor of buyers.

I can’t really see a motivated seller agreeing to a longer or higher earnout, but I can absolutely see them opting for a lower purchase price in exchange for a quick deal.

I think ultimately it depends on how severe the recession is, and how long it goes on for.

Would Liquidity Be Affected?

I’m loathe to keep saying “It depends” for every answer, but it really does depend.

Currently, the markets are pretty liquid even in the high six-figure range, so I don’t think anything will change dramatically.

Liquidity is part of the same criteria as multiples and a buyer market. They’re all related.

If liquidity does drop, then multiples and deal structures will naturally change too.

If more people are willing to take seller financing or lower multiples, then liquidity would likely not be affected too much.

Aside from this, liquidity will likely be affected by outside forces.

When governments inevitably lower interest rates, debt could become cheaper, making liquidity even better than it is now. But in all likelihood, the ability to secure that debt may become harder (See above section about SBA loans).

Then you also have to consider that people may not have as much capital available if their stock savings have taken a beating, or if they’ve lost their job.

But, if people have exited the stock market after a ten year bull-run, surely that cash needs to go somewhere else?

Like I said, there are so many different factors and it’s hard to see how it might play out.

Too Many Factors To Consider

Ultimately, with this article I can’t help but conclude that there are a lot of uncertainties to consider. There could be equal arguments for more buyers coming into the space, or fewer. There are also equal arguments to suggest multiples go down, or stay the same.

My overall thoughts are that there will be more bargains available, and a savvy investor could do well.

Equally, it’s best to make sure you have sufficient cash reservers, so that if you DO need to sell, you’re not forced to sell in a hurry and accept a lower price.

“Cash is king” is always a useful mantra to remember, but even more so in times of economic uncertainty.

I think that it’s important to consider all of the above points, even if it’s impossible to predict them. Doing so will help you keep your eyes open for both potential issues, and opportunities.