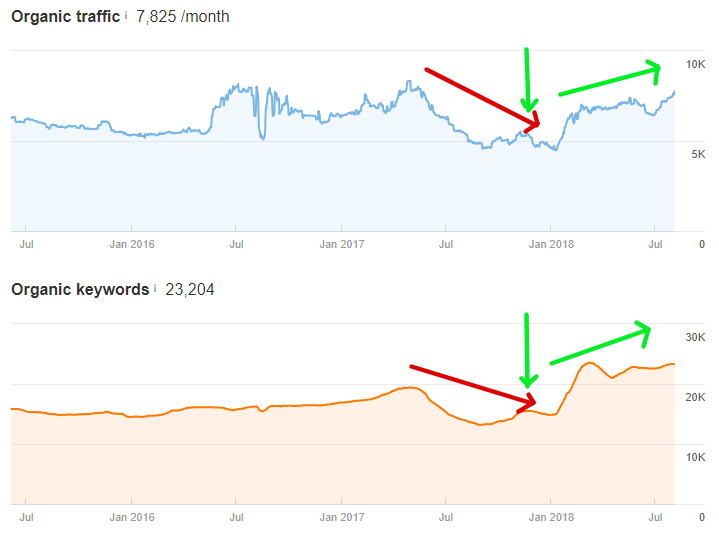 After the popularity of our last case study post, we decided to share more results, especially ones that involve sites not doing particularly well.

Most case studies you see online, particularly in this space, are edge-cases where somebody achieved fantastic results.

It’s rare to see people talking about the more frustrating side of internet marketing.

Today’s case study actually consists of both. It is definitely a success story with positive results, but it starts off with the more frustrating side of things.

Essentially, over the past 3 and 5 months respectively, we’ve taken two sites that were on a major traffic and income decline, audited them, made a lot of onpage changes, and waited patiently for the results to kick in.

Site 1 had been on a decline from the day we bought it in June, to the middle of March. We finished our revamp on this site in December.

Site 2 (below), we started working on for an Onfolio partner in December, finished it in February, and it also started turning around in late March/early April.

We’ve included keyword graphs as well as traffic graphs to show this isn’t just a seasonal traffic spike, and that the sites are both ranking for more keywords now.

Both sites required a full audit before we actually started changing anything. Both sites also had a ton of problems.

Here’s a brief overview of some of the problems we encountered:

When we acquired the site, we were quite happy with the quality of the content as the previous author was an actual expert in the field, so we were confident we had the right foundation to grow the site.

However, as the site presented quite a few problems with a very outdated theme, poor mobile speed, and had serious cannibalization issues, both ad monetisation and scaling content were very difficult.

Also, the site entered a period of decline quite soon after we acquired it, so we bit the bullet and decided to shoot for an overhaul instead of going for patching leaks.

Here is how the traffic declined over time shortly after we took over the site:

Overview of steps we took to fix it:

Our partner approached us with a CPA site in the medical space that they purchased off a broker in early 2018, which was losing a bit of traffic but still pulling a healthy income. The site then got hit in the Aug 1st update losing half off its traffic, and some point later in October where it got completely wiped out.

It was another case of a site with authority, great backlink profile and good content that was poorly built from a performance and architecture POV.

We conducted an extremely similar process on this site as the site above, with the exception of not starting from a blank wp install, as the site didn’t have that much history and the database wasn’t as messy.

The main takeaways of this rebuild were:

Since these were pretty big, wholesale changes, we used a staging server and didn’t push the changes live until they were all done.

This is pretty standard practice and allows you to get everything perfect, rather than updating things on the fly.

It also meant that it was going to take a while for Google to process all the changes, and even longer for them to kick in.

When making changes like this to a site, it can seem like nothing is actually happening at first, and there’s no guarantee it will, which is why we decided to share these results.

In our case, one site responded after about 4 months, and the other after 3 months. In both cases the response has been emphatic once it kicked in though.

What’s also worth noting is that because we improved the UX and the structure on the first site, the display ads have been responding with increasingly high RPM’s.

It’s often the case with display ads that as you get more traffic, your RPM’s decline at first, because advertisers need time for their ad budget to adjust to your increased traffic. With this site, we’ve just seen everything compounding and as traffic goes up, RPM also goes up, and therefore total revenue goes up twice.

This site has basically tripled its daily display ad earnings over the course of a month, with us doing nothing except watching Google finally reward the changes we made back in December.

Note: Early April is traditionally a low earning period anyway, because the first weeks in a new quarter are slow, as advertisers reset their quarterly ad budget. This means that it is somewhat inevitable that a site will increase its RPM throughout April. However, none of our other sites saw such a quick acceleration as this one.

How To Replicate This

It’s important to audit your sites regularly, and one of the first things we do when buying a site with investors, as part of our Full Service option, is to audit a site for issues and opportunities.

However, for most of you, you probably only have minor issues that need fixing. The sites in this case study were in need of some severe TLC and had been on a decline for some time. This is why we set up staging servers and proceeded with major overhauls.

Going into full details of the things you should check and exactly how to perform an audit is slightly beyond what this article is about, so here is an overview of the process.O

We run our standard audit process on the site as follows:

After running those checks on both sites, we knew we had to go deep. And it’s paid off.

The moral of this story is that when you do take the time to sit down and completely overhaul a site, you are going to have a few months of patience on your hands, but the end results can be well worth it.

We also just wanted to give an update on some of our results, because they deserve celebrating.