8 Ways Sellers Can Try To Cheat You 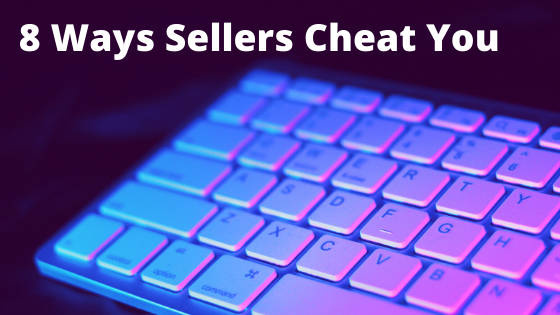 It’s essential to learn due diligence if you want to get better at buying online businesses.

We improve our own skills every time we look at a site, and we’re still learning.

This doesn’t mean that you’ll never be capable of performing diligence yourself, but it does mean it’s an ongoing practice and you should try to learn it as much as you can.

Further down the page, I’ll share some tips on how to level up your own due diligence abilities, but for now, you just need to understand that it’s something which gets easier with practice.

It’s a bit like a magic eye painting. At first, it just looks like a mess, but the longer you look, the more it comes into focus.

Actually, it’s more like trying to read a city map in a foreign language. It makes no sense.

Once you understand the language though (or even get the map the right way up), you get a much clearer picture.

Today’s post is going to give you some of that language, by focusing on the key ways unscrupulous sellers can burn novice buyers.

Please note, this list isn’t exhaustive! It’s just some of the things we’ve come across or we imagine sellers could do.

If a website you’re looking at isn’t doing any of these things, then there’s a good chance it’s legit, but this isn’t the be-all-end-all.

Scammers are creative buggers, and it wouldn’t surprise me if they come up with new ways to trick you out of your money.

I should also point out that identifying scams is just one part of the process. If you’re able to rule out the possibility that someone is scamming you, that still doesn’t necessarily mean it’s a good investment.

It’s fairly common for a seller to exaggerate how much something is worth, and doing so isn’t exactly a scam. However, it’s a method scammers almost always use, so it makes the list.

A prime example would be, building a site on an exact-match domain, and showing how much traffic that keyword gets in Google, therefore how much your site will get.

Flippa used to be rife with this kind of thing, but these days it seems they’ve cleaned up their listings.

Back in 2014 though, you’d see almost every listing saying the same thing:

“You should buy my-awesome-acne-site.com because ‘acne’ gets a million searches per month in Google and you’ll make millions”.

There was no real traffic going to the site and it was just a cookie-cutter template sold over and over again on a different domain name, but people fell for it and bought the sites in droves.

This was also why I decided to start Human Proof Designs back in 2014, as I wanted to offer starter sites that weren’t complete BS.

I touched on this earlier, but to expand further, there are a lot of sellers who will sell the same site over and over again, but with a different domain name. Even the content is the same.

This is only really an issue at the lower level “starter site” tier, as the seller isn’t claiming any income or traffic to the site.

Being aware that it is something people do is still useful though, as it will train you to check Copyscape (or even just copy and paste sentences from the site into Google) to see how many clones of the site are out there.

You can buy fake traffic to websites to make Google Analytics look a lot more impressive than it should be.

You can buy fake Pinterest traffic, fake Facebook traffic, fake direct traffic, pretty much any type of traffic other than organic Google traffic (which can still be somewhat faked).

This is dangerous, as you may see a site that claims to get hundreds of thousands of visitors, but after you buy it, you realize the traffic is worthless. Display Ad networks will likely not accept your traffic or will question it, and affiliate commissions won’t happen, since the traffic is just sent by bots.

The best way to defend against this is to buy sites claiming the largest majority of their traffic as being from Google search, since you can verify they do at least have organic rankings using tools like Semrush or Ahrefs.

It’s fairly common to see a site listed somewhere on Flippa or another marketplace that claims to get a ton of traffic, yet they have zero search rankings. Typically, this makes the traffic hard to verify.

You can also try to match up the traffic levels with any verified income, but this can also be somewhat of a red herring.

We’ve seen sites with minimal traffic that earn five figures, and others with swathes of traffic that earn minimal amounts, so it’s not really possible to say “That’s too much income for such little traffic, this must be a scam”.

Sidenote: Third party tools like Ahrefs will only “estimate” how much traffic a site gets, so don’t worry if they don’t match up with a seller’s claims. Instead, use them to verify if a site actually does have Google rankings.

There are a few ways this is done.

The first, is simply to fabricate screenshots of affiliate dashboards or paypal/stripe dashboards, making it look like sales exist when they don’t.

To get around this, it’s always best to ask for a video walkthrough of those dashboards, where you can see the seller log in and demonstrate the dashboard is real.

Or even better, negotiate an inspection period, like the 2 week period Empire Flippers has, where you take over the accounts and verify they do indeed earn money before releasing payment to the seller.

Some sellers may be wary of this, especially if it’s their first time, so it’s important you explain why you’re doing it, and how Escrow will make sure you don’t just take their site and not pay up.

Another thing some sellers do is to actually buy their own products or get their friends to do so, then refund them later once the sale has gone through.

This is hard for them to fake at scale, so only really a potential problem with smaller income amounts, and I’ve only been suspicious of it on a handful of occasions.

Really though, the inspection period and working with a proper broker who verifies everything first, is the best way to defend against this scam method.

This is usually done in conjunction with backlinks. A seller might own a private network of backlinks or a few redirected domains, used to power up the site’s SEO. After you take control of the site, they build a new one instead (or likely already had one), and then point the links to their new site.

Over time, and sometimes quite quickly, your site loses its rankings, and theirs takes its place.

The best way to spot this is to learn how to identify PBN links or to hire somebody like Rick Lomas to do a backlink audit before purchasing the site. He’ll be able to spot other potential red flags with the backlink profile too, such as potential penalties waiting to happen.

Migrating a site from a seller to a buyer can be confusing if you don’t know what you’re doing, so it is easy for a seller to send you the wrong files (even accidentally).

That said, you shouldn’t release the funds to them until you’re absolutely sure you have full control of all the right assets anyway.

As long as you have the domain name, and access to WordPress (where applicable), you can usually get everything you need and can use a migration plugin to do the heavy lifting. It’s even better if you also get their hosting details.

Best scenario: Take over their hosting.

Next best: Get access to their hosting to migrate the files out.

Just make sure they haven’t created multiple users that can take back control of the site after you’ve changed the passwords on the main user.

If a site is monetized with paid traffic, a simple way a seller could rip you off is to just clone the site, spin up a new Facebook page or Adwords account, and start sending traffic to that one instead.

They will also likely lie to you about which campaigns convert the best, or how to set up ads, so that you can’t compete with them.

If you’re a beginner, the best way to avoid this is really to just avoid buying a paid traffic reliant asset.

Method 8 – Not Giving The Full Picture

This one is actually fairly common. It’s not so much as a scam as it is somewhat negligent.

A site may earn $3,000 per month for 6 months, get hit by a Google penalty, and see its income halve instantly.

The site owner decides to sell, and portrays the income as “averaging $2,750 last six months”.

This isn’t a lie, but it’s also not portraying the full picture.

In fact, one of the first things I do when viewing any site, is stick it in Ahrefs and see if the chart looks like this:

The more third party tools you’re familiar with, the better.

If someone is claiming a boatload of organic Google traffic comes to their site, but Ahrefs, Semrush and SimilarWeb disagree, and the seller won’t give you Google Analytics access, you can probably just end the conversation there.

It gets harder when dealing with someone who uses paid traffic or referral traffic, as it’s harder to verify than one based on Google rankings, which are public for anyone to see, which is why most people deal with sites that get Google traffic.

There are still ways to verify though, and the more tools you’re familiar with, the better.

The best rule to follow in the meantime is, if someone can’t backup their claims in a credible way, you’re probably better off waiting for someone who can.

As mentioned at the start of the article, the more you practice, the better you get.

This would involve browsing Flippa listings, subscribing to the Empire Flippers newsletter, Richard Patey’s newsletter, or reading articles like this one from FE.

The more listings you get exposed to, or explanations of listings in Richard’s case, the better.

And finally, remember that avoiding a scam is crucial to your success, but it isn’t the only thing you need to learn about.

Read my article about a good and a bad purchase to learn other factors you need to consider.

2 thoughts on “8 Ways Sellers Can Try To Cheat You”

Businesses We Passed On

Why We Offer Preferred Shares

The Pros And Cons Of Selling Privately

Onfolio acquires and manages a diversified and profitable portfolio of online businesses, each with a niche content focus.